I’ve been ravenously reading post-apocalyptic books, particularly ones that investigate humans trying to survive in a world that is altered from environmental degradation.

I think the fiction realm of environmental literature is so fascinating. It’s not that they are factual, or predictions, but there’s little grains of our potential future hidden in them like sand stuck in between the sheets of your bed, your toes, behind the picture frame, under the rug.

The book I’m reading right now is called The Dog Stars by Peter Heller. I love this book; it follows the main character, Hig, in a world where 99% of the population has died from a super flu virus and blood disease.

Hig lost his wife, all the people and creatures that mattered to him, left in the wake of utter despair, but he still found beauty in the world.

The dry pine needles crackled and crunched beneath my boots. Reflected the sun in the shadeless places so there was no relief for the eyes in looking down. Two weeks now, something like it, and the flowers were mostly gone. The fastest spring ever.

In the old cycles the drought would break, the monsoon would come, the snows would sweep in, and the life would come back.

Books like these get me in a weird mood. I’m enchanted by their language but also freaked out by the content. I always get in conversations about what will be “the end.” I say, I don’t know. It could be anything, everything. Some fucked up virus, the earth stopping its reliable rotation, nuclear warfare, Yellowstone’s caldera volcano exploding, a random meteor crashing into earth, artificial intelligence getting too intelligent.

Life is filled with this enchantment of scary shit.

We went to Myakka State Park this weekend and stopped on the side of the road at a bridge that stretched across a freshwater river. The water is gunmetal gray, and ripples radiate across the surface, swirling around the archaic rind on the backs of alligators. Their heads bloomed out of the darkened waters, hardly noticeable. Millions of years to perfect the art of camouflage. One gator, right below the shadow of the bridge, turned its knobby head and was slowly swallowed by the inky waters, fading into murky yellow and green and finally into blackness. A trail of bubbles was left behind. 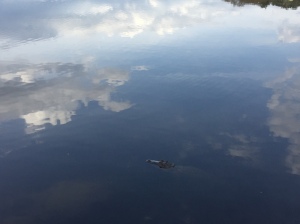 Fluffy beautiful clouds above, lurking danger below, out of sight, almost out of mind.

1 thought on “Nowhere on Earth to Go”